Several Bollywood personalities on Tuesday demanded justice for actor Rhea Chakraborty by posting a quote on smashing the “patriarchy” and a hashtag #JusticeForRhea.

This comes briefly after the Narcotics Control Bureau arrested Chakraborty in a drug case linked to the demise of actor Sushant Singh Rajput.

Celebrities like Vidya Balan, Neha Dhupia, Sonam Kapoor, Shibani Dandekar, Anurag Kashyap, and others took to social media to share a quote that was written on the T-shirt that Rhea had worn on Tuesday which happened to be her third day of interrogation with the bureau.

And now the latest celebrity to join the bandwagon of celebrities seeking justice for Rhea Chakraborty post her arrest is Alia Bhatt’s sister Shaheen & Kareena Kapoor Khan. Both Shaheen and Kareena shared a message on their Instagram story stating, “Roses are red, violets are blue, let’s smash the patriarchy, me and you.” 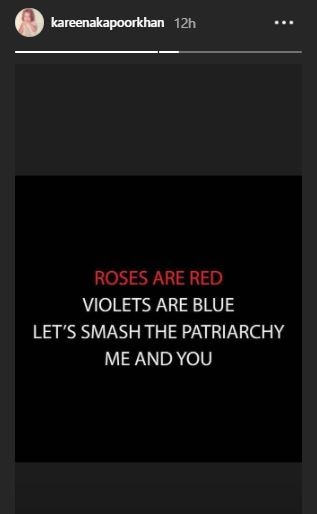 Many celebrities from the Bollywood industry are sharing the same post on their respective social media handles.