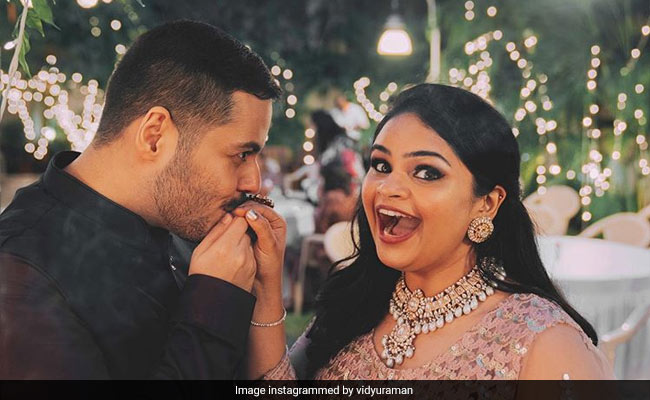 South actress Vidyullekha Raman, who is the daughter of Tamil film and television actor Mohan Raman, got engaged to fitness expert Sanjay on August 26 in the presence of family and close friends. The 28-year-old actress, on Monday, announced the good news with her fans on social media, where she shared several stunning pictures from her engagement ceremony. Vidyullekha Raman, who has been with Sanjay since March last year (she revealed this on one of her Instagram stories), made the engagement announcement on Instagram like this: “We got Roka-Ed! Sanjay and I had our roka ceremony (formal announcement) on August 26 in an intimate manner with close family around us. It was our little ray of sunshine and we couldn’t be more grateful for the love we received.”

The actress also shared that all safety factors were considered for the engagement ceremony amid the ongoing coronavirus crisis. “We wore masks and removed them for the pictures (before anyone asks!) Thank you all so much for showering us with your best wishes! The best is yet to come,” added Vidyullekha Raman.

Vidyullekha Raman, who trended big time in June for undergoing a major physical transformation, can be seen sporting two different gorgeous traditional outfits in the pictures.

Check out pictures from Vidyullekha and Sanjay’s engagement ceremony here:

Vidyullekha Raman has been sharing posts showing her drastic transformation on Instagram for quite some time. She followed a strict workout routine and lost several kilos during the lockdown. Check out some of her posts here: