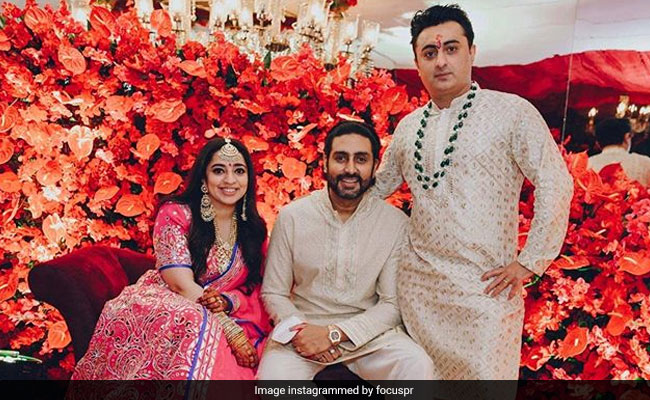 Actor Abhishek Bachchan, who recently recovered from the coronavirus, attended filmmaker JP Dutta’s daughter Nidhi’s engagement ceremony in Mumbai on Sunday. A picture of the actor posing with the couple has gone viral on social media. For the engagement ceremony, the bride-to-be wore a vibrant Abu Jani Sandeep Khosla lehenga while the groom-to-be Binoy Gandhi complemented her in brocade kurta set. Abhishek Bachchan sat on a chair between the couple and he smiled happily. Abhishek Bachchan shares a close bond with the Duttas and in a birthday post dedicated to Abhishek, Nidhi described him as her father’s “first born” and “the closest thing to having a brother.” Abhishek’s wife Aishwarya Ria Bachchan, daughter Aaradhya, and parents Jaya and Amitabh Bachchan skipped the event.

Abhishek Bachchan was launched in Bollywood by JP Dutta in 2000 film Refugee with then debutante Kareena Kapoor. They collaborated again for 2003 film LOC: Kargil and 2006’s Umrao Jaan opposite Aishwarya Rai Bachchan.

Over the weekend, the Duttas also hosted an intimate mehendi ceremony for Nidhi, which was attended by actress Sara Ali Khan and her mother Amrita Singh. Actress Dipika Kakkar, who had a small role in JP Dutta’s Paltan, attended with her husband Shoaib Ibrahim. It was a small ceremony, in compliance with the government guidelines for public gatherings including wedding functions.

Binoy Gandhi is an upcoming filmmaker – he has assisted director Kunal Kohli in Fanaa (starring Aamir Khan and Kajol) and in Teri Meri Kahaani (starring Shahid Kapoor and Priyanka Chopra). Nidhi Dutta is the business head at JP Films.