Alia Bhatt-Sanjay Dutt’s ‘Sadak 2’ became the lowest-rated film on IMDb of all time after receiving over 35 thousand votes, and getting the score of 1.0.

The much-hyped union of the Bhatts with Sadak 2 has proved to be a damp squib. After intense trolling for the stars, the film’s trailer and songs, amid the nepotism debate sparked in the wake of Sushant Singh Rajput’s death, the Mahesh Bhatt directorial continued to receive flak upon its release online. The Alia Bhatt-Sanjay Dutt-Aditya Roy Kapur starrer has now gone on to become the lowest-rated film on IMDb.

Sadak 2’s score on IMDb currently stands at 1.0 after 36,123 votes. The movie-rating platform’s list of ‘Bottom 250’ is now led by one of the most recent films. The lowest that a person can rate a film on the website is 1, and the highest is 10. 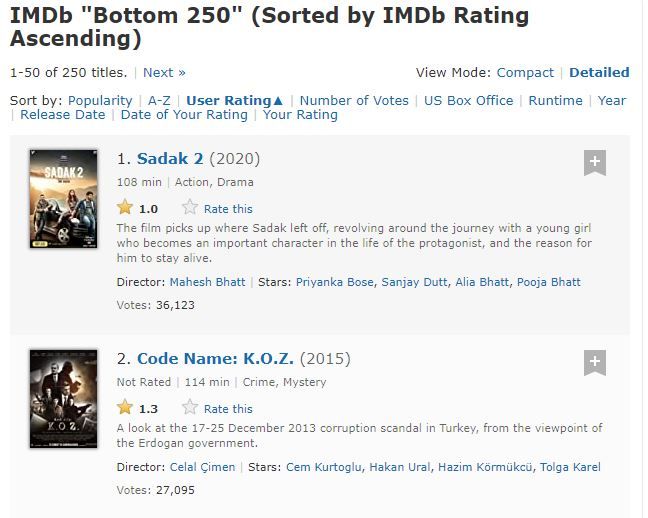 Previously, Sadak 2 had also become the third most-disliked trailer on YouTube. The trailer has received 12 million dislikes till now, in comparison to 707K likes, and the responses to the songs were on similar lines. While that could be linked to a campaign, even critics and other netizens severely criticised the film upon its release on Friday.

READ: ‘Sadak 2’ Trailer Becomes The Third Most Disliked Video In The World With 11MN Dislikes

Alia’s mother Soni Razdan and half-sister Pooja Bhatt, who plays a part in the plot of Sadak 2, had earlier lashed out at the trolling that the family was receiving amid Mahesh Bhatt being summoned by Mumbai Police in the case, apart from his name being mentioned in numerous other theories related to the death. Alia had turned off the comments section on social media.

Sadak 2 is the directorial return of Mahesh Bhatt after two decades, and  also his first collaboration with Alia. The film takes forward the story from the 1991 film Sadak, of Sanjay Dutt’s character Ravi, who is seen addressing Pooja, before taking Alia Bhatt and Aditya Roy Kapur’s characters on a  journey filled with revenge, religion and twists. The movie also stars Jisshu Sengupta, Makarand Deshpande, Priyanka Bose, Akshay Anand, among others.

READ: ‘Sadak 2’ & 5 Other Bollywood Movie Trailers That Were Majorly Disliked On YouTube

Get the latest entertainment news from India & around the world. Now follow your favourite television celebs and telly updates. Republic World is your one-stop destination for trending Bollywood news. Tune in today to stay updated with all the latest news and headlines from the world of entertainment.