If you look around yourself, a lot of celebrities are either getting married or are pregnant or just became parents. Be it Kareena Kapoor Khan, Anushka Sharma or cricketer, Hardik Pandya and his beautiful wife, Natasa Stankovic. Amongst these, Bollywood actor, Shahid Kapoor’s gorgeous wife, Mira Rajput Kapoor has also spilled beans on the planning of a third child. Scroll down to know more! (Recommended Read: Mira Rajput Kapoor Gives A Savage Reply To A Fan’s Wish To Be Like Her Husband, Shahid Kapoor)

Bollywood superstar, Shahid Kapoor and his beautiful wife, Mira Rajput Kapoor had completed five years of marital bliss on On July 7, 2020. To mark her five years of marital bliss, Mira had shared an unseen picture from her Gurudwara wedding with Shahid and had expressed gratitude in the caption. The ‘IT’ couple of Bollywood, Shahid and Mira never fail to give couple goals to the millennials, and their fun camaraderie with each other is the best thing ever! Shahid Kapoor’s gorgeous wife, Mira Rajput Kapoor took to her IG handle to host an ‘Ask me anything’ session with her fans and got bombarded with all kinds of fun questions. And the sassy lady that Mira is, she answered all of them with utter grace and wits. One user probed her on further family planning and asked, “Third child?”, to which, Mira replied, “Hum do humare do.” Another asked her about the theme of her kids’ birthday parties, and she revealed, “Misha’s was unicorn meets peppa”, and “Zains’s can’t be anything but construction.” Take a look at the snaps of the question and answers below: Further in the fun, interactive ‘Q/A’ session, a user asked, “What did motherhood teach you?”, to which, Mira replied, “Patience. Gratitude towards my Mom (also because Nani house is the best day care). The blessing that is noise cancelling headphones. That the heart can love more than you ever imaginedy. What I still need to learn- How to keep a straight face while scolding my son.” Another user asked, “An advice to raise children in this generation?” Mira gave a very witty reply to this which was, “Listen to your parents’ advice. And Peppa Pig.” One user also enquired which one is more mischievous, Missy or Zain? And Mira said, “Zain! Mish is sweetheart.” Another user asked her, “What is necessary to make a relationship stronger? Actually I m very possessive.” Mira gave a very beautiful answer which can be read as “It’s as important to desire dependency as it is to give space. Healthy balance.” (Also Read: Samantha Akkineni Shares An Adorable Wish For Father-In-Law, Nagarjuna On His 61st Birthday) Amongst other questions, a fan wished to be like her husband, Shahid Kapoor. To which, Mira gave a sassy reply and wrote, “But you’ll have to find someone else to be your wife.” She was also asked what she calls her husband, Shahid and her reply was, “Suniye'” When asked “Who is more caring?? U or Shahid sir?, she replied, “I am thoroughly spoilt”. When she was asked about her favourite actor, Mira gave a witty reply and said, “Am I expected to say @shahidKapoor?” followed by a wink-tongue emoticon. 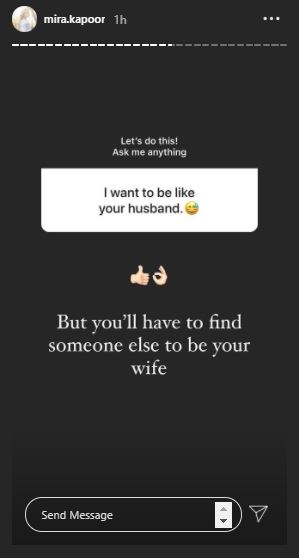 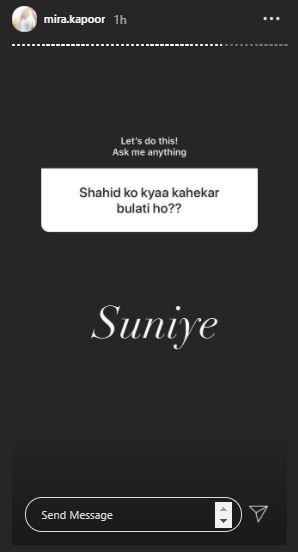 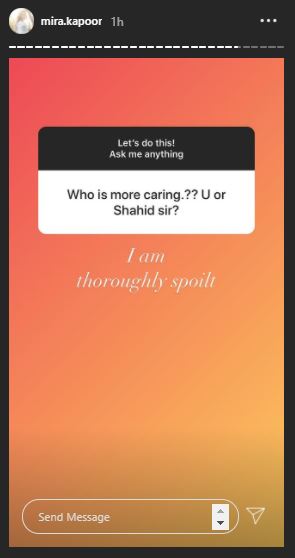 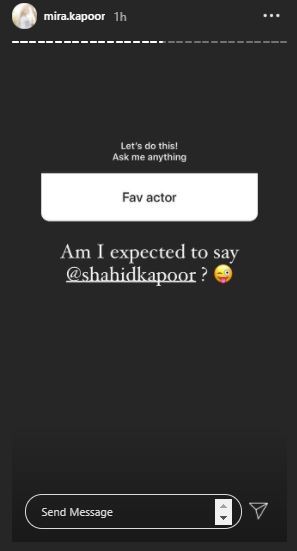 On August 25, 2020, Mira had shared a glimpse of her daughter, Misha’s 4th birthday preparations. She had posted an Instagram story, wherein we could see the birthday decorations going on in full swing. Mira had captioned it as “Birthday prep! DIY is the best.” On the same day, Mira had posted a throwback picture of a day before she had delivered her baby girl, Misha. In the picture, we could see Mira’s beautiful smile and her unmissable pregnancy glow as she had posed for the camera. Alongside it, she had written, “Throwback to the day before I popped #4yearagotoday. I can understand the belly getting bigger, but what’s with the nose getting huge?” (Don’t Miss: Kareena Kapoor Khan Radiates Pregnancy Glow In Her Green Salwar Suit As She Steps Out On A Rainy Day) Isn’t Mira Rajput Kapoor savage? What do you think? Share with us!