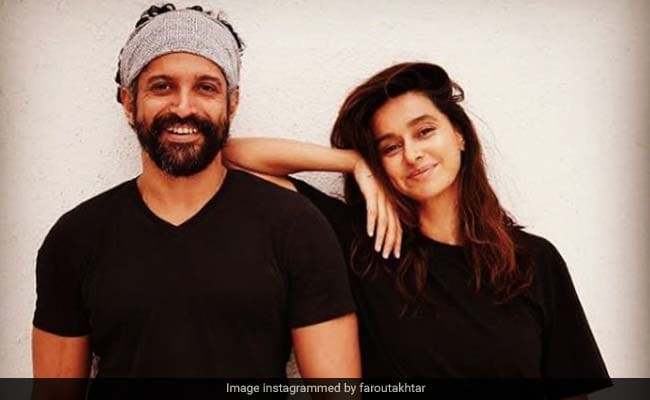 Birthday girl Shibani Dandekar turns 40 today and to make her day all the more special, a perfect wish arrived from her boyfriend Farhan Akhtar. Sharing a happy picture, in which the birthday girl can be seen leaning on his shoulder, Farhan Akhtar wrote: “You’ll always have my shoulder to lean on. Happy birthday. Love you.” In the picture, the couple can be seen happily posing together, dressed in matching black t-shirts. Farhan Akhtar’s best friend Hrithik Roshan also wished the actress in the comments section. “Happy birthday Shibani,” he wrote. Shibani’s sister and VJ Anusha dropped heart emojis on the post.

Meanwhile, Anusha Dandekar posted the sweetest message for sister Shibani. She wrote: “Happy Birthday, Chicken, I don’t think I could love a person more than I love Apeksha and you. There is no bigger protector and anyone braver than you. I love you with all of me… Can’t wait to celebrate soon, miss you so much.”

Shibani Dandekar became a household name after she started hosting Indian Premiere League. She has participated in reality shows such as Khatron Ke Khiladi and Jhalak Dikhla Jaa. Shibani was last seen in the second season of Amazon Prime’s web-series

Shibani Dandekar and Farhan Akhtar started dating in 2018. The actor was earlier married to celebrity hairstylist Adhuna Bhabani, with whom he has two daughters – Shakya and Akira. The actor was last seen in Shonali Bose’s The Sky Is Pin, which also starred Priyanka Chopra, Zaira Wasim and Rohit Saraf. The film released last year and it was also screened at the Toronto International Film Festival.