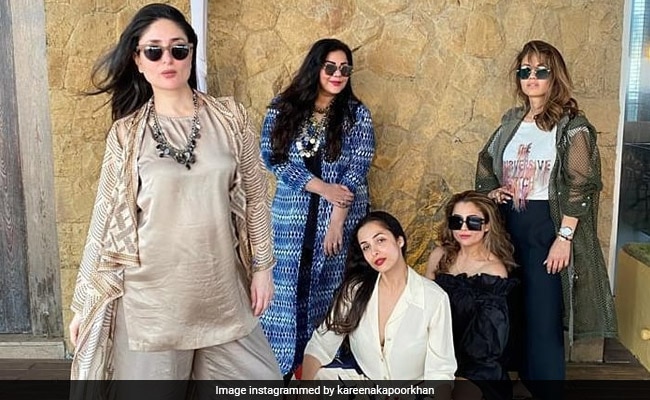 Kareena Kapoor’s latest post on Instagram will give you major squad goals. The actress, on Wednesday, posted a picture featuring her girl gang and needless to say, it immediately stole the show on the Internet. The photo features Kareena’s BFFs Malaika Arora, Amrita Arora, Mallika Bhat and Natasha Poonawalla. Kareena’s sister Karisma, who is also a part of the “squad,” is missing from the frame. Sharing the photo, Kareena Kapoor wrote: “When worst comes to worst, squad comes first. PS: Karisma Kapoor is missing in action.” In the photo, Kareena looks stunning in a copper-coloured outfit while Malaika can be seen wearing a shirt and what appears to be palazzo. Amrita looks gorgeous in a black dress.

Check out the picture of Kareena Kapoor and her “squad” here:

Malaika Arora also shared a picture from the get-together. “Some social distancing with my squad,” she wrote.

Kareena Kapoor often expresses her love for her squad on social media. Picture of the stylish girl gang have also been shared by Malaika Arora and Karisma Kapoor in the past. Last month, Kareena re-shared a picture originally posted by Malaika, which also features Karisma, Amrita and Mallika, and captioned it, “Forever us,” adding a couple of heart emojis.

Meanwhile, also check out other pictures of Kareena and her BFFs:

Kareena Kapoor will next be seen in Karan Johar’s period drama Takht and Lal Singh Chaddha, in which she will share screen space with Aamir Khan. Both Lal Singh Chaddha and Takht are slated to release on Christmas next year.