New Delhi: One of the most favourite couples of the television industry. Divyanka Tripathi Dahiya and husband Vivek Dahiya brought home their Ganpati Bappa for the first time ever on the auspicious occasion of ‘Ganesh Chaturthi 2020’. Though they had a low-key celebration, the couple was overjoyed and equally excited on the festival. Earlier, Vivek Dahiya took to his Instagram and shared some pictures from their celebrations. Now, the actress also took to her Instagram and shared some pictures revealing her excitement about welcoming Ganpati Bappa for the first time in her home.

The ‘Yeh Hai Mohabbatein’ actress said that their ‘Ganu’ was love at first sight and He finds a way of coming to you when He wants to. She also said that though Ganpati Bappa stayed with them for a short while, He gave them positivity and peace for the times to come.

Divyanka’s caption read, “They say He comes to you when He wants to. He finds a way. Our Ganu was love at first sight. Stayed with us only a short while giving us positivity and peace for the times to come. Ganpati bappa morya! #EcofriendlyGanpati #DiveksFirst”

Reacting to this post, her co-star from ‘Yeh hai Mohabbatein’ Karan Patel’s wife Ankita Bhargava wrote that she wishes the couple to have a baby by next Ganesh Chaturthi. She wrote, “Having him come over is the most beautiful feeling ever!!! Godbless you guys with more and more happiness! Next year Gannu bhaiyya ko company dene keliye koi Baal Ganesha hona chahiye!  #sorrybutnotsorry.” 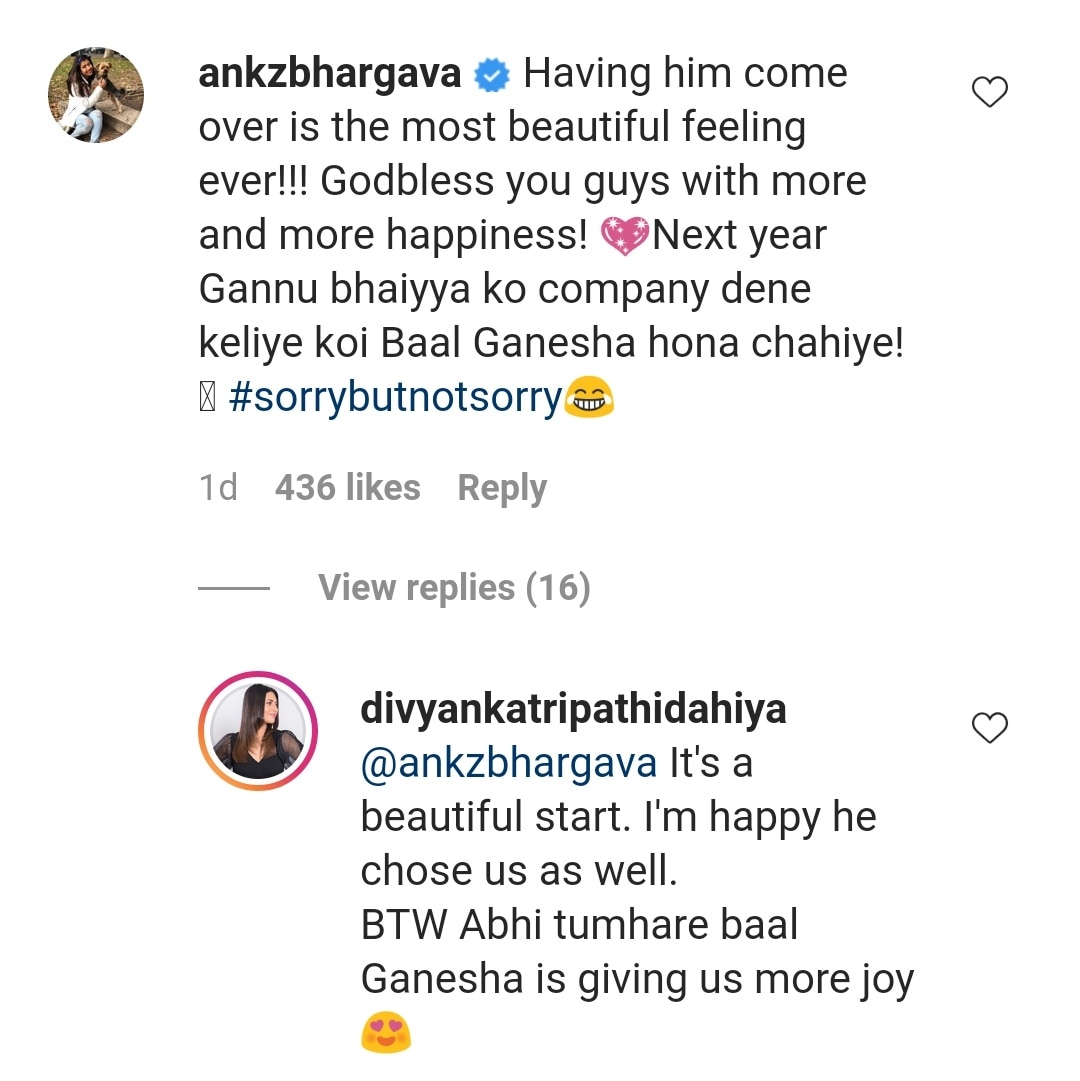 The ‘Banoo Main Teri Dulhan’ also shared a dancing boomerang video along with her husband dancing to the beats of ‘Ganpati Bappa Morya’. She wrote, “#GanpatiBappaMorya #EcofriendlyGanpati #DiveksFirst”

Also, recently there were rumours doing the rounds that Divyanka Tripathi will replace Erica Fernandes in ‘Kasautii Zindagii Kay 2’. However, the actress took to her social media and reacted on the speculations. She brushed off all the conjectures and said that these are all just rumours.

Watch this space for more updates.