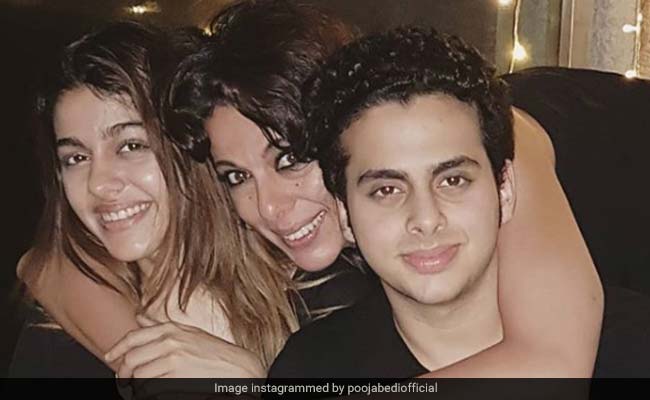 Actress Pooja Bedi found a spot on the list of trends after her interview with the Times of India, in which she talked about the relationship of her children – daughter Alaya Furniturewalla (Jawaani Jaaneman) and son Omar – with her fiance Maneck Contractor. Alaya and Omar are Pooja’s children with her ex-husband Farhan Furniturewala, to whom she was married from 1994 – 2003. When asked about her plan to get married, Pooja Bedi said: “More than I wanting to be married, it has been my kids who tell me that I should settle down. They are still fond of the wonderful men I brought in their life… They are fond of all my exes. But they don’t want me to mess this up. They are extremely fond of Maneck. They even tell me, ‘Mummy, look at Daddy, he’s married Laila aunty (Feroz Khan’s daughter Laila Khan) and had a child’.”

“Experiences in life are supposed to make you better, not bitter. If one marriage doesn’t work out, it’s not necessary that the second one won’t,” said Pooja Bedi and she added, “My Dad (Kabir Bedi) has been married four times. He has married some wonderful women, we have had wonderful step-moms and his relationships and marriages have taken him from strength to strength.”

Pooja Bedi debuted in Bollywood in 1991 film Vishkanya but she’s best-known for her role in Jo Jeeta Wohi Sikandar, featuring Aamir Khan and Ayesha Jhulka in the lead roles. She featured in headlines after starring in controversial celebrity reality show Bigg Boss 5.

Pooja Bedi will soon be seen in Masaba Masaba, a Netflix web-series which is a semi-fictionalised version of the eponymous designer’s life.