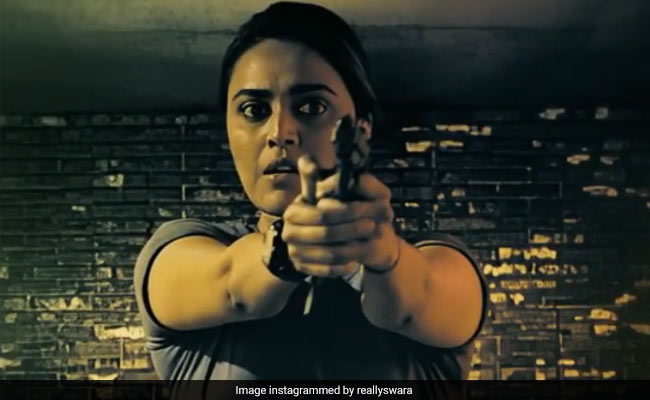 Nightmarish scenarios are relentlessly piled on one another in Flesh, an eight-episode web series created by Siddharth Anand (director of War and Bang Bang) and scripted by Pooja Ladha Surti (co-writer and editor of Andhadhun), as a sleep-deprived policewoman pounds the streets of Mumbai and Kolkata to bust a gang of human traffickers whose horrific tentacles are spread across the country.

In a major screen-persona shift, Swara Bhasker sports khaki, talks tough and takes aim at the most reprehensible criminals one can imagine – paedophiles, rapists and flesh traders on the prowl for vulnerable women and children. The script etches out the character sharply enough for the audience to be invested in her fate at least at the do-or-die junctures of the occasionally harrowing story.

Bhasker not only pulls off the upright cop act with effort to spare in a broad sense, but also manages to bring out in sharp relief the angularities of the woman that Assistant Commissioner of Police Radha Nautiyal is. She does not for once play the “I am a woman in a man’s world” card and expects no quarters. She suffers from insomnia, does not care a fig for the system, pushes herself to the limits of endurance, and has a past that explains her constant edginess.

The actor at the other end of the moral spectrum – Akshay Oberoi as a bisexual sociopath whose actions border on the feral – snarls and growls at everything in sight pretty much like the two dogs that he dotes on. His Bengali (which he breaks into every now and then to establish that he is in Kolkata) does not pass muster, but he does convey the degree of menace required to put the fear of unbridled evil in the hearts of the ordinary mortals around him, law-abiding or otherwise.

However, the series, as a whole, trips on the jerkiness of its rhythm. Flesh is uneven, crammed with much more than it can comfortably hold, and is replete with stretches where it is just bones and no meat. But when it does acquire some heft, the murky, degenerate world it probes does make you squirm in disgust and outrage.

The first two episodes of the Eros Now original series are a bit of a blur as director Danish Aslam goes about setting the stage and introducing the key characters before the nefarious activities and the crime-busting plans take over. The action unfolds in three principal locations: in an abandoned general hospital somewhere in Punjab, and warehouse in Mumbai and a plush and garish den in Kolkata.

The third chapter onwards, despite the series frenetically jumping back and forth between one location and another, between one strand of the story to another, Flesh gathers enough momentum to be able to paper over the wobbles that it runs into along the way. There are numerous points in the narrative when you wish the show had more muscle, but some of the shocks and swerves, when aimed in the right direction, do their job: they keep you on tenterhooks.

Flesh opens inside a dark, dank building. Several children lie on the hard floor. The camera tilts down from above to reveal the outlines of the sleeping bodies. A male figure emerges from the back of the hall. He commits an act of sexual violence on one of the captive girls. Another makes a dash for freedom with her little brother.

As they sit by a road that runs through a forest, it is pitch dark. The boy is hungry. His sister assures him that they will find food up ahead. “Kidhar aage? Aage toh sirf raat hai (Where up ahead, there is only night up ahead),” the boy says. “Aur raat ke aage kya hoga (And what lies beyond night), the girl asks. The brother’s reply is starkly portentous: Kya hoga? Aur raat (What else, more night).

Cut to an NRI couple – Reba and Shekhar Gupta (Vidya Malvade and Yudhishtir Urs). Their marriage is on the rocks. In a Mumbai hotel room, they bicker incessantly. In another room, their only daughter, Zoya (Mahima Makwana), strikes up a social media conversation with a boy named DJ. A major crisis awaits the Gupta couple – their 16-year-old daughter vanishes from the wedding venue.

Hideouts and highways – these locations are in different states – are the principal spaces where the action takes place. A key player in this tale of deadly greed, runaway violence and dreadful morbidity is a shady businessman in Kolkata, Shuvo Chattopadhyay (Uday Tikekar), who, under the cover of a real-estate enterprise, runs a human trafficking and prostitution racket.

This narrative is strewn with facile Bengali-isms. The avuncular Shuvo is Kaku (uncle) to Niketan (Sayandeep Sengupta) and Dada (elder brother) to Taj (Oberoi). The two younger men are constantly at each other’s throat. Their ambition is to control the empire of crime that Shuvo has built.

Their bitter rivalry sets off a chain of events that puts the “shadow organisation” in danger of implosion as different law enforcement outfits, including the National Investigation Agency (no less!) and the Anti-Human Trafficking Unit of Mumbai Police (of which Radha Nautiyal is a key part) swing into action.

Someone likens Radha to Satyabhama, Lord Krishna’s consort who was known for her rage and courage. Your bravery has yet to be put to the test, the female protagonist is told with a snigger. Radha, who swigs rum in a shady bar, hour of day and night no bar, when she isn’t at work, takes that jibe to heart and sets out to prove that she needs no certificate of valour from anybody.

In the same breath, the same character cites the case of Al Capone, the Depression-era American bootlegger who killed at will but who was eventually felled by something as innocuous as a tax evasion investigation. The reference to the fabled gangster and his downfall is made in order to impress upon Radha Nautiyal the wisdom of launching a double-pronged attack on the human traffickers who know how to cover their tracks as they smuggle women and children across state borders.

In a crowd of characters, two other women – the shadowy Pearl (Natasa Stankovic) and Jaskirat (Geeta Agarwal) – stand out. Agarwal, playing a woman seeking vengeance for the cold-blooded murder of her truck driver-husband, makes an especially strong impression. When she is on the screen, she towers over everyone else.

Vidya Malvade as the anguished mother and unhappy wife, Yudhisthir Urs in the role of the husband whose past has a bearing how the series pans out and the Mahima Makwana, playing the kidnapped daughter, play their parts with distinction. But too many of the characters who pop in and out of the overstuffed and frequently skin-deep Flesh fall prey to the loose ends that litter the path.

Swara Bhasker and Akshay Oberoi keep the show on the boil. Is that reason enough to binge watch Flesh? Worth the gamble.