The National Commission for Women (NCW) on Tuesday recorded the statements of various witnesses including Bollyood actor Sonu Sood, director Mahesh Bhatt and others, in connection with a man and his company IMG Ventures which was allegedly blackmailing and sexually assaulting several women on the pretext of modelling opportunities.

The Commission, however, expressed its displeasure over the non-appearance of actors Urvashi Rautela and Mouni Roy.

“Mouni Roy and Urvashi Rautela did not attend the scheduled hearing despite several intimations sent from our end,” the Commission said in a tweet.

Filmmaker Mahesh Bhatt appeared for the online hearing. Bhatt has assured the Commission of full cooperation with regard to this matter.

“As a father of three girls, I have the highest regard for the cause taken up by Ms. Yogita and the National Commission for Women and express my full cooperation for the crusade,” he said.

He also denied any association with IMG Ventures or Sunny Verma and said: “I have neither entered into any agreement nor received any monetary consideration for the event. Unfortunately, my name and images were picked up from social media and misused in relation to the event without my consent and authority. When I confronted them on this, they have apologised profusely and withdrawn all my images in association with the event. I am issuing this statement to make everyone aware that I have no association with IMG Ventures, Sunny Verma and Mr. and Miss. Glamour 2020 and my name and credibility should not be misused for promotion of the event to lure participation of others.” 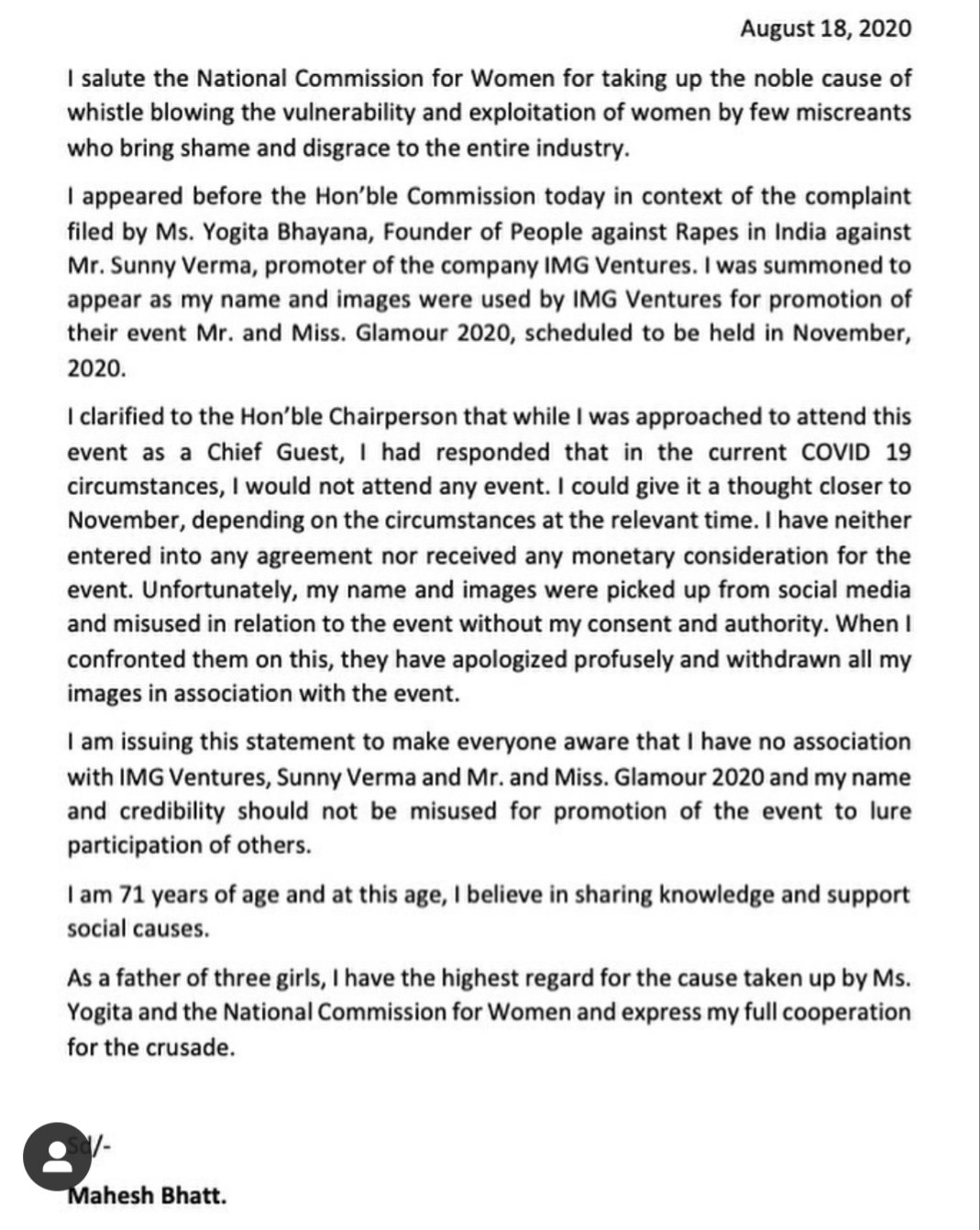 The NCW recorded the statements of witnesses during the online hearing and will now be preparing a report based on its findings.

According to the complaint, one Sunny Verma, promoter of IMG Ventures, has been allegedly blackmailing and sexually assaulting several women on the pretext of modeling opportunities.

“No. of TV and film actors are also promoting his company in a video advertisement,” Bhayana’s complaint had said.

The complaint further alleged that to make it look genuine, his company had also been charging an entry fee of Rs 2,950. Once the girls applied, female accomplices of Sunny Verma allegedly suggested submitting their nude pictures in order to get better ranking in the contest.

“After receiving the nude pictures and sometime even before, Sunny used to get in touch with the girls to push them for completely nude pictures and videos. He also asked as well as threatened them to submit to his sexual desires if they were interested in modelling as a career or wish to win the contest,” the complaint said.

The complaint further claimed that once Sunny used to establish physical relationship with the girls, he used to blackmail them for regular sexual favours and many girls from across the country have suffered sexual and mental assault at the hands of Sunny and his accomplices.

In her complaint, Bhayana said: “I have now received several letters, texts and audio clips from several girls as proof of this modus operandi of Sunny Verma and IMG. The girls have written details of sexual harassment under the condition that their names and identity will not be revealed. They have also shared their chat screenshots and audio call record with Sunny Verma. The chats are full of demands of sexual favours from Sunny Verma.”

“We request NCW to take cognisance of our complaint and take appropriate action against Sunny Verma, his female accomplices, the partners of the company as well as against the Bollywood stars who are promoting IMG Ventures despite knowing everything,” it said. IANS