Popular TV actress Jennifer Winget, last seen in ‘Beyhadh 2’, has reportedly turned down a whopping offer from the makers of Bigg Boss.

New Delhi: ‘Bigg Boss’ fans have not been able to control their excitement ever since the makers dropped the first promo of the show. Earlier this month, the channel released an exciting promo of ‘Bigg Boss 2020’ on social media. Viewers are quite excited to see which celebs will participate in the new season of the popular reality show after Salman Khan said that ‘BB 14’ will ‘change the scene’.

Also READ: After A ‘Tedha’ Season, Salman Khan’s Bigg Boss 14 To Have ‘Rocking’ Tagline? Details Inside!

We had earlier informed you that ‘Bigg Boss 13’ contestant Paras Chhabra’s former girlfriend Pavitra Punia might participate in ‘Bigg Boss 2020’. As per the latest buzz, another popular TV star might be seen in the fourteen season of ‘Bigg Boss’. We are talking about Shivin Narang.

Interestingly, Shivin’s ‘Beyhadh 2’ co-star Jennifer Winget has said no to the makers. According to a Twitter page named ‘The Khabri’, the makers offered her a whopping amount to participate in the show. However, the ‘Bepannaah’ actress turned down the Rs 3 crore offer. Jennifer’s manger informed that she has declined the offer.

Shivin Narang, who was also approached for the show last year, is expected to feature in ‘Bigg Boss 14’. Check out the tweet! 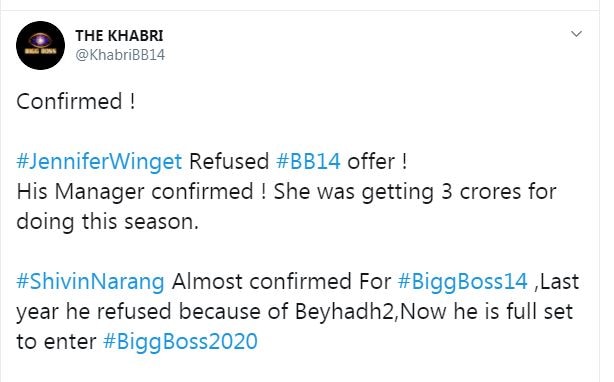 Jennifer Winget and Shivin Narang played the respective roles of Maya and Ruda in Sony TV’s ‘Beyhadh 2’. The show co-starring Ashish Chaudhary went off air due to the COVID-19 crisis. Jennifer and Shivin’s sizzling chemistry managed to grab a lot of eyeballs but the show couldn’t rake in TRPs for the channel.

Talking about ‘Bigg Boss 14’, the makers are reportedly planning to introduce a ‘lockdown’ twist in the show. They have approached several popular small screen celebs including Vivian Dsena, Nia Sharma, Jasmin Bhasin and Aakanksha Puri for the show. ‘BB 14’ is expected to go on air by the end of September 2020 on Colors channel.

The last season of the show was won by ‘Balika Vadhu’ actor Sidharth Shukla. The ‘Dil Se Dil Tak’ beat Asim Riaz, Shehnaaz Gill and Rashami Desai to lift the winner’s trophy. ‘Bigg Boss 13’ surpassed all the expectations and managed to set the TRP charts on fire despite airing at a late night slot.

The show’s team is looking to re-create the magic in the new season. Are you excited for ‘Bigg Boss 14’? Tell us in the comments section below.