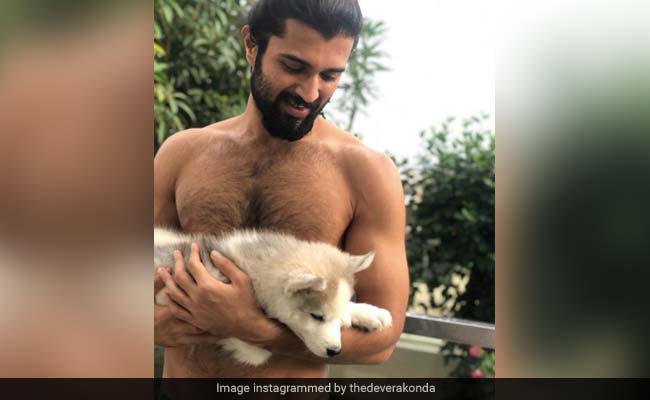 South actor Vijay Deverakonda Instagrammed a shirtless photo of himself along with his partner-in-crime – his pet dog named Storm – and sent his Instafam into a tizzy. “My cute beast,” the Dear Comrade actor captioned his photo, in which he can be seen playing with baby Storm. Vijay Deverakonda, who has over 8 million followers on Instagram, was showered with a whole lot of love from her Instafam with the furry one stealing some of the attention. “How are you so handsome?” commented a fan of the actor while another added: “Fallen in love completely.” Fans also flooded Vijay’s feed with the red heart and the fire emojis. Vijay Deverakonda’s photo with Storm garnered over 17,000 comments in less than a day!

Here’s Vijay Deverakonda posing with his adorable fur baby. How cute is that?

Last month, the 31-year-old actor just introduced the new member of his family – the husky puppy named Storm – along with few adorable selfies. “Introducing Storm Deverakonda,” he captioned the photos.

Vijay Deverakonda began his journey in acting with 2011 film Nuvvila. However, his breakout performance was in the 2016 film Pelli Choopulu. He is best known for starring in films such as Sandeep Reddy Vanga’s Arjun Reddy, Ye Mantram Vesave, Mahanati, Nadigaiyar Thilagam and Geetha Govindam among others. Dear Comrade remains his last film, which filmmaker Karan Johar will remake in Hindi. Meanwhile, Vijay Deverakonda is all set for his Bollywood debut – he will co-star with Ananya Panday in director Puri Jagannadh’s yet-untitled multilingual film.