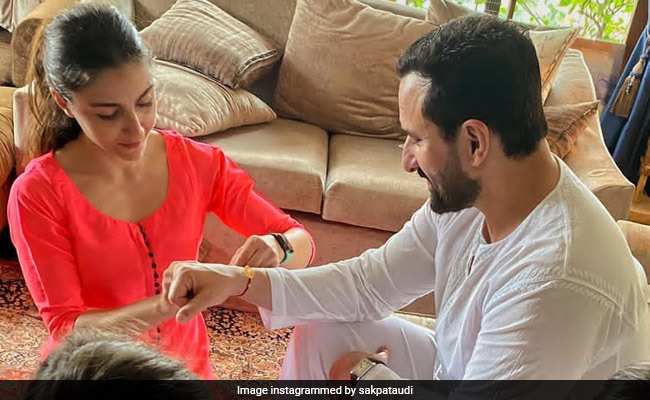 A few hours after posting pictures from Inaaya and Taimur’s Raksha Bandhan festivities on social media, Soha Ali Khan shared another photograph, featuring (no points for guessing) her brother and Bollywood actor Saif Ali Khan. In the picture, the brother-sister duo, dressed in traditional outfits, can be seen smiling with all their hearts. Soha captioned the post: “It’s not the visible thread but the invisible bonds that tie siblings together – a shared childhood, experiences only they have had that have made them who they are. It is a bond unlike any other and one that should be nurtured and celebrated. Happy Raksha Bandhan.”

Earlier on Tuesday, Soha shared pictures of her and Kunal Kemmu’s daughter Inaaya, and Saif Ali Khan and Kareena Kapoor’s son Taimur on her Instagram profile. She captioned the post: “Happy Raksha Bandhan #timandinni.” In the picture, Taimur and Inaaya can be seen, twinning in white outfits.

In terms of work, Saif Ali Khan has a super busy schedule. His line-up of films includes Hunter and Bhoot Police. The actor starred in the period drama Tanhaji: The Unsung Warrior and comedy drama Jawaani Jaaneman, this year. He also made a cameo appearance in late actor Sushant Singh Rajput’s last film Dil Bechara.