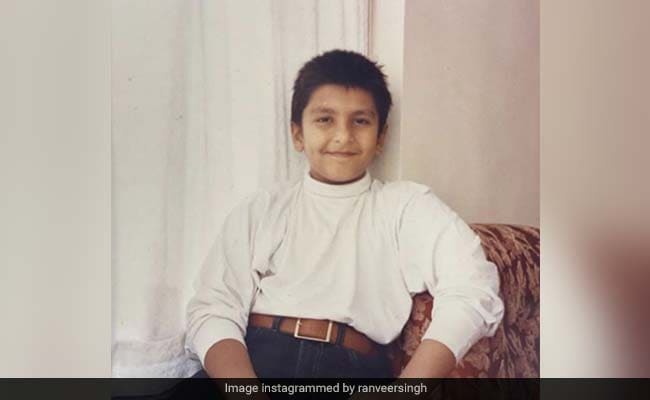 Ranveer Singh, who is known for his OTT sartorial choices, made a trip down memory lane on Wednesday and shared a really old photograph of himself on Instagram. The throwback picture happens to be from his childhood days and it proves that the actor’s “style” has been on point since forever. The blast from the past features a much, much younger Ranveer Singh wearing a white full sleeves t-shirt tucked into his jeans, which he paired with a brown belt. His expression says it all. Sharing the picture, Ranveer Singh borrowed a line from the track Style Mein Rehne Ka from the 2001 film Style and wrote: “Style mein rehne ka” with music note emojis. Check it out:

Ranveer Singh, who has quite a reputation for experimenting with androgynous fashion, gives glimpses of his quirky sartorial choices often at events and on social media. We have handpicked a few of his posts showcasing his fashion choices for you, take a look. You can thank us later.

In terms of work, Ranveer Singh was last seen in Zoya Akhtar’s 2019 film Gully Boy. His upcoming film ’83 was supposed to release earlier this year but the makers postponed it due to the ongoing coronavirus crisis. Ranveer will co-star with his wife Deepika Padukone in Kabir Khan’s sports drama. The actor’s upcoming projects also include Yash Raj Film’s Jayeshbhai Jordaar, which is expected to hit screens on October 2, and Karan Johar’s period drama Takht. He will also feature in a cameo in Akshay Kumar’s Sooryavanshi.