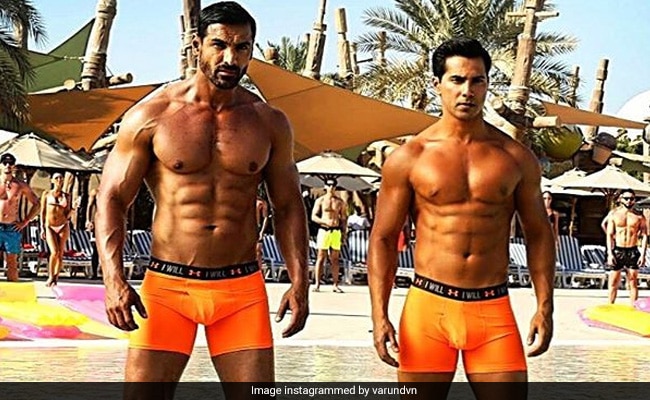 John Abraham and Varun Dhawan in a still from Dishoom. (Image courtesy: varundvn)

As John Abraham and Varun Dhawan’s 2016 film Dishoom clocked 4 years on Wednesday, the latter revealed an interesting anecdote from the shooting days and it will make you go, “Wow, really?” Varun, whose brother Rohit Dhawan directed the film, revealed that while shooting the film in the desert, John Abraham ate several watermelons in just one day – not six or seven but 21 in total. Pretty amazing, huh? In his post, Varun Dhawan also hinted at a possible sequel to Dishoom. He shared a still from the film featuring himself and John and wrote: “4 years of Dishoom. This was one of the best teams I worked with. Two of my elder brothers always had my back. Maybe it’s time to get the band back together. Also, John ate 21 watermelons in one day while filming in the desert.” Dishoom released on July 29 worldwide.

Dishoom also starred Jacqueline Fernandez, Saqib Saleem, Akshaye Khanna and Rahul Dev. Last year, a Mumbai Mirror report stated that team Dishoom will reunite for the sequel and that the second part is expected to go on floors by the end of 2020. However, neither the lead actors nor the makers have announced the sequel officially yet.