Mari Selvaraj-Dhanush’s ‘Karnan’ is the latest attempt to tell the story of the tragic hero on screen.

The tragic figure of Karnan, one of the best known characters from the Indian epic Mahabharata, has inspired many songs, books and films. The eldest of the Pandavas but denied his place in the family, born to the same mother but shunned due to the social location of his adoptive parents, the injustice meted out to Karnan would move the coldest of hearts even if he fought on the ‘wrong’ side.

On Tuesday, director Mari Selvaraj released the poster and making video of his upcoming film Karnan with Dhanush in the lead. There’s not much known about the film at this stage but it’s likely to be a retelling of the story, set in contemporary times.

The poster shows a sword upheld by several hands, the image speaking of resistance, while the video has a silhouette of Dhanush raising the sword as the skies turn red. The sun is shown shining through the clouds as Karnan (Dhanush) raises the sword. 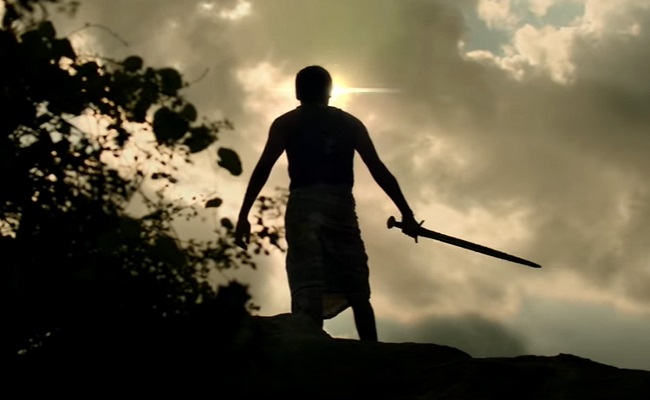 In the Mahabharata, Karnan is born to Kunti, the daughter of Shurasena, a Yadava chief, and the sun god, Surya. After Kunti receives a boon from sage Durvasa, which enables her to beget a child from any god of her choice, she excitedly invokes it and becomes pregnant through Surya. It’s only then that she realises that as an unmarried woman, she will face social ostracism. Kunti therefore abandons the baby – Karnan – who is born with kavacha (armour) and kundala (earrings). She sets him afloat in the Ganges in a basket.

Karnan is found and adopted by Radha and Adhiratha, who belong to a caste group for whom the traditional occupation is charioteering. While Karnan’s loyalty to Kaurava prince Duryodhanan and their friendship has been traditionally celebrated, later readings of the epic have focused on how he was insulted for his caste and denied opportunities. Like Ekalavya from the same epic, Karnan’s story too has found resonance in historically-oppressed caste groups.

Sivaji Ganesan played many memorable roles in his career, but his portrayal of Karnan is widely regarded to be one of his finest. The 1964 mythological film told the Mahabharata from Karnan’s perspective, and starred many other stalwarts like NT Rama Rao, Savitri and Muthuraman.

The film, produced and directed by BR Panthulu, is closely modelled on episodes from the Mahabharata but makes Karnan the hero of the narrative. He’s portrayed as a generous man who does not hesitate to give all that is asked of him and more.

The film begins with a distressed Kunti setting baby Karnan afloat in the river. He soon grows up to become warrior Karnan, who challenges Arjunan’s (Muthuraman) archery skills. But though he’s the famed archery teacher Dronacharya’s student too, Karnan is questioned by the gurus, who declare that his ‘low birth’ means he cannot participate on an equal footing with Arjunan, who is of royal birth (Arjunan, in fact, is born to Kunti and Indra, the lord of the heavens).

Duryodhanan (Ashokan) comes to his rescue (in the film, it’s because he senses an opportunity to bring his cousins, the Pandavas, down by a notch) and laughs at the logic offered by the gurus. He also makes Karnan the king of Anga, to make him an “equal” to Arjunan, but the assembly is dissolved. 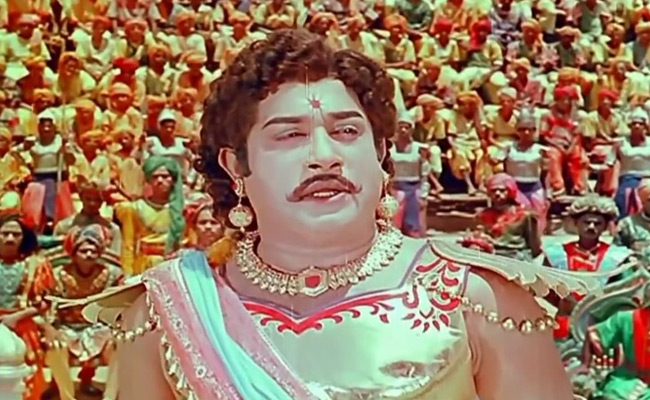 While the 1964 film does question casteism and privilege ordained by birth to a certain extent, it is a straightforward retelling of the epic which does not indulge in subversions. For instance, the episode in which an angry Parasuramar finds out that Karnan is not a Brahmin but a Kshatriya because he’s able to bear pain and tolerate the sight of blood, is presented as such. The narrative does not question the casteist notions within it.

However, there is an interesting little story that’s woven into the script. In Karnan’s new court, a young boy who has set fire to a patashala (school) rushes in, chased by guards. When Karnan asks him why he did so, the boy reveals that because he’s an orphan who does not know who his parents are, people were not willing to accept him in school. “It is wrong for a lowborn to study with those higher than him, it is a sin, get out, they say,” the boy tells Karnan. “I did not want this injustice happening in your reign and that’s why I burnt the school. Is that a crime?” he further asks.

Karnan hails the boy and even apologises to him, taking him along to get him admitted to a school. He also says that it is his duty as the ruler to ensure the welfare of children like him. The episode not only fits with the caste discrimination apparent in the society described by the epic, it would have also been relevant to the audience watching the film at the time. In 1967, the anti-caste and pro-social justice Dravidian movement in the state would go on to form the government for the first time.

While the screenplay of the film was written by AS Nagarajan, the dialogues were by Sakthi TK Krishnasamy. The latter, a Gandhian and a playwright, had earlier given Tamil cinema Veerapandiya Kattabomman, and was hailed for his literary flair by Dravidian leaders like Annadurai as well as Karunanidhi.

In 1991 came a modern take on the Mahabharata which also had Karnan as the hero. Directed by Mani Ratnam, Karnan was played by none other than superstar Rajinikanth.

Named Surya, Karnan here is abandoned by a 14-year-old girl, Kalyani. She gives birth to him and puts him in a goods train. He eventually becomes the henchman of Devaraj (Duryodhanan, played by Mammootty), a don. Shobana plays Draupathi, the wife of the Pandavas – here, she’s recast as Subhalakshmi, a Brahmin woman who falls in love with the fiery Surya.

Some versions of the Mahabharata have Draupathi stopping Karnan from participating in her swayamvar because he’s “lowborn.” In some others, she recognises that all the qualities that she wanted in a man are present in Karnan but she cannot marry him because of his social status. In Thalapathi, Subhalakshmi is equal parts drawn towards and repelled by Surya’s violent streak. 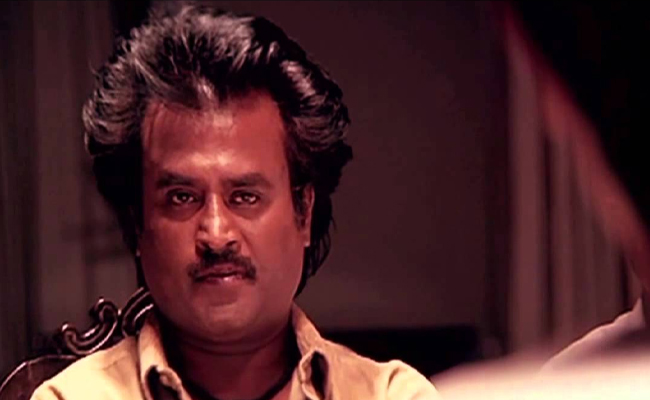 Subhalakshmi’s father, a staunch Brahmin, insults Surya because of his origins and Subhalakshmi gives in to the pressure to wed another. She ends up marrying Arjun (Arvind Swamy), the Collector who is determined to put an end to the Devaraj-Surya reign. And Arjun is none other than the son of Surya’s mother, Kalyani (Srividya).

The question of caste does come up but mainly in the context of marriage; the systemic injustice that is part of the Mahabharata as well as Karnan does not receive much attention in this retelling. The film primarily revolves around three relationships – Surya’s friendship with Devaraj, his love for Subhalakshmi but above all, his quest to know his mother. What troubles him the most is why he was abandoned at birth. While the Sivaji film was a mostly faithful adaptation of the epic and ends with Karnan’s death, Thalapathi has him reuniting with his mother.

In both films, Karnan’s sacrifices are glorified as a mark of the hero’s generosity although he is constantly subjected to humiliation.

It will be interesting to see Dhanush playing the role of Karnan that Mari Selvaraj has visualised. The director’s last film, Pariyerum Perumal, was about a Dalit law student who falls in love with a savarna woman and the violence that this unleashes in his life.

Mari Selvaraj is among the new breed of Tamil directors who are vocal about casteism and are invested in changing how stories about the oppressed are told on screen. Dhanush, meanwhile, delivered one of the biggest hits in his career with Vetrimaaran’s Asuran, in which he played a Dalit man fighting for justice for his family.

From what we have seen so far, Mari Selvaraj’s Karnan is likely to be based on the epic but set in contemporary times and in a backdrop that is immediately relevant. In an interview with Vikatan, Mari Selvaraj clarified that the film was not based on 1995 caste riots in Kodiyankulam.

“Filmmakers are not required to repeat past real-life incidents, magazines and newspapers are more than enough. Karnan will talk about people from a humble background. It is a fictional film based on stories I have heard in my life. But unlike Pariyerum Perumal, here my protagonist doesn’t shy away from injustice because his upbringing is different. Karnan was supposed to be my first film, but director Ram sir told me that I have to prove myself first to narrate this script to a big star. After Pariyerum Perumal, I got a call from Dhanush sir, and Karnan happened,” he said. “Unlike the mythological Karnan, my protagonist will fight and get back his right,” he further added.

Perhaps the pain in Karnan’s voice, so far romanticised, will finally echo in our ears as the wake-up call that it ought to be.