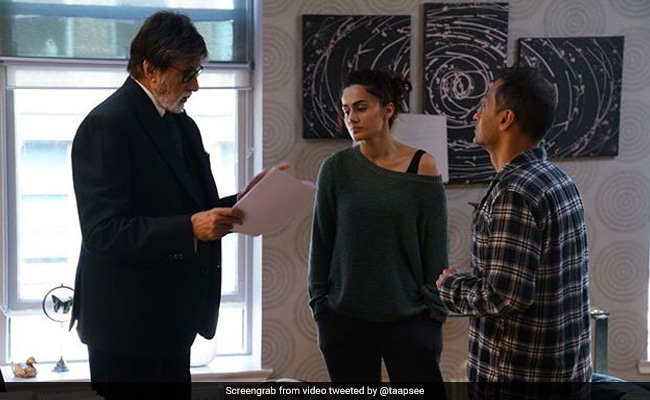 Bollywood actress Taapsee Pannu really misses being on film sets and her recent Instagram posts clearly reflect that. On Saturday, the actress shared another picture from the sets of the 2019 Sujoy Ghosh-directed film Badla, in which she shared screen space with her Pink co-star Amitabh Bachchan, and actress Amrita Singh. Taapsee, in her post, tried to decode everyone’s expressions and wrote in her caption: “Me looking at how much of the scene is left for the day. Mr Bachchan continues to rehearse non-stop. Sujoy is thinking of where can he find good pizza for dinner post pack-up. The usual on Badla set.” She accompanied the post with the hashtags #Throwback #archive and #quarantinepost.

On Friday, Taapsee shared her experience of working with Amrita Singh in the film. Later, Amrita Singh’s daughter Sara Ali Khan reacted to Taapsee’s message and wrote in her Instagram story: “Thank you so much Taapsee. Amma sends you a big hug.” An excerpt from Taapsee’s post read, “First day of shooting with the fierce Amrita Singh. I don’t know if it’s the Sardarni in me or the no holds barred way of life that connected us and it’s so cool to see her so excited and nervous to approach her scenes like a debutant wanting to do her best and listening to the director with the intention to do her best. One of the rare actors who has a very nonchalant depth in her performance. I would’ve loved to click a picture with her that day but she was too busy rehearsing her bhaari lines while I didn’t have much to say in the scene and I didn’t want to disturb her.”

Earlier this year, the Manmarziyaan actress posted a BTS picture along with the film’s director Sujoy Ghosh. She wrote in her post: “5 years back when we met each other for the first time we never knew that this will be the film we will end up working on together but now that we have, we surely know there will be many more times we shall surprise each other not just with films together but with more useless topics of never ending conversations. Keeping the madness alive.”

Taapsee Pannu is best-known for her performances in films such as Pink, Naam Shabana, Soorma, Mulk and Manmarziyaan among others. In 2019, Taapsee Pannu starred in several films, including Game Over, Badla, Saand Ki Aankh, and Mission Mangal, Her last project was the 2020 release Thappad.